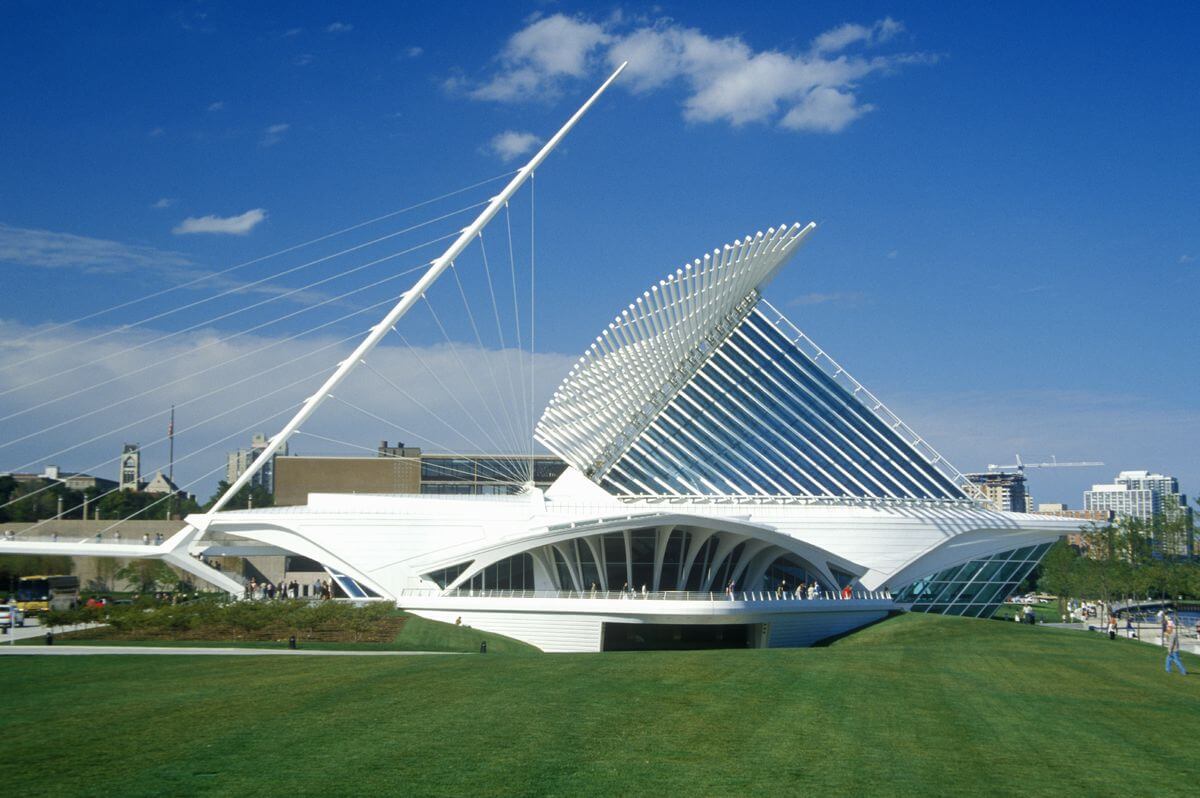 Museum architecture buildings in the USA are home to some of the best art in the world, from New York to Los Angeles and everywhere in between.

While it’s easy to get distracted by the Gauguins and Lichtensteins, it’s worth noting that the buildings themselves are worth seeing.

Onlookers from the outside are often captivated and enticed to enter the museum for a visceral experience because a well-designed museum’s architecture rivals the art.

We interpret and appreciate art differently when it is presented and viewed in a good architectural context. Good architecture shapes the way we perceive an image or a piece of art, whether it is a small paper sketch or a gigantic two-story sculpture.

Museum design has become a badge of honor, attracting starchitects like the Pritzker Prize-winning Shigeru Ban and the iconic Spanish architect Santiago Calatrava. A museum is, first and foremost, a public space, a visual reminder of the value of art, culture, and critical thinking.

For architecture enthusiasts, the Crystal Bridges Museum of American Art is a must-see; it features a pristine natural setting, gorgeous structures designed by Moshe Safdie, and a Frank Lloyd Wright Usonian house.

A group of pavilions houses the museum’s galleries and studios, in addition to two spring-fed ponds surrounded by bridge structures.

Continuing the natural motif, the museum bridges are covered in deep brown copper. In keeping with the surrounding Ozark hillsides, the museum walls are curved. The museum’s exhibitions, library, sculptures, and walking trails are all put together in a beautiful environment.

A new museum dedicated to the history and culture of African Americans in Washington, D.C. has been opened in September 2016 and is expected to attract tens of thousands of visitors over the next few years.

People stayed for a long time at the museum after they arrived, which was something the museum did not expect.

This acclaimed museum is one of the most impressive additions to the city, with a “dwell time” ranging from two to six hours. A $540 million project was designed by architect David Adjaye.

In its downtown Denver location, the Denver Art Museum maintains a collection of more than 70,000 pieces, which is the largest collection from the West Coast to Chicago.

An example of the city’s most striking structures is the North Building, a seven-story, 210,000-square-foot design by Italian modernist architect Gio Ponti that was built in 1971. In addition to being a renowned design, the North Building represents the only completed work Ponti completed in the United States.

As an unconventional gateway between the East Lansing community and the university, Hadid designed the 46,000-square-foot space in a forward-looking manner.

In addition to its three levels, the museum has an array of green features, like occupancy sensors that control lighting and recycling stations that are controlled by solar power.

As one of the top museums in the western United States for American art, international textile arts, and costumes, and ancient American, Oceanian, and African art, the museum is internationally renowned.

This building was originally built in 1894, and several additions have been made over the years, including a tower added in 1921. The Loma Prieta earthquake in 1989 caused significant structural damage to the museum designed by Swiss architectural firm Herzog & de Meuron, which reopened in 2005. The museum is west of the Mississippi, the most visited art museum, according to its website.

As a free public art museum, this institution has been serving the Kansas City community since December 11, 1933, when it was opened. To accommodate the museum’s expanding collection, the Bloch Building was constructed in 2007 by architect Steven Holl and houses over 35,000 works of art.

In addition to the ever-changing natural light during the day and the glowing illumination at night, the all-white, translucent glass structure ensures that all art is presented in the best possible light.

Designed by Voorsanger Architects in Louisiana, the museum examines the American Experience during World War II, from why the war was fought to the experiences of civilians.

An extended historical journey is created by the architecture, which is divided into pavilions that link together to create a continuous path.

As a museum that champions contemporary art and culture, the Museum of Contemporary Art Chicago attracts visitors both with its quality collection and building design.

A classical proportion based on the square grid of Chicago was used in the design of the current museum by German architect Josef Paul Kleihues.

One of the most iconic features of the museum is its elliptical main staircase, which provides a dramatic ascent and a beautiful backdrop for photos as visitors ascend to the galleries.

The Institute for Contemporary Art in Boston, designed by award-winning architects Diller Scofidio + Renfro, is a 65,000-square-foot building with a dramatic folded ribbon form and cantilevered structure.

Architects of the museum envisioned the building in terms of a “sky down” construction, where they aimed to provide the viewer with shifting glimpses of the water and the city skyline throughout the museum’s galleries.

A classic example of museum architecture, the Guggenheim Museum in New York is one of the world’s most recognizable museums. As a result of changes in design and rising labor and material costs during that time period, the Guggenheim was not completed until 1959. It was designed by U.S. architect Frank Lloyd Wright in 1943 but was not completed until 1959.

Even though it took a long time, it was well worth the wait. Modernists have traditionally looked at the Guggenheim as the most important building Wright erected during his late career.